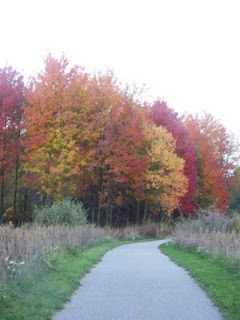 My favorite time of the year is here and we are really trying to make the most of it with Alex and Evan being a year older. We have been going to the park a lot lately, taking advantage of the warmer fall days, trips to Cider Mills and hopefully picking out pumpkins this weekend. I have been slacking a little lately with taking pictures, but I promise to get on that!


School is going great for Eric and the boys, I on the other hand decided after only 3 days to drop out. I just couldn’t do it and although there were people around me questioning my decision to even go to school I thought I could be Super Duper Mom (instead of just plain old Super Mom) but I was wrong. I think the timing is a little off, so I am not going to rule it out, I just can’t do it right now. I am actually proud of myself for recognizing that it wasn’t for me instead of getting too far in and getting in over my head.


I personally have been feeling very overwhelmed lately. I think it’s just adjusting to the new schedule and having 2 whiny, screaming two year olds. There have been many days when I myself have had to count to 10 and take a time out to get my sanity back. At first I thought it was me, but in talking with other Mom’s (in particular Mom’s with Twins) I found that I am not alone. Being a stay at home Mom is so rewarding and so exhausting at the same time, but like every job it has its pros and cons. Most of my days are 12 hours + with 10 of them being on my own. I guess I didn’t realize it was going to be this hard.


Alex got his AFO’s a couple of weeks ago and so far they are working out ok. He can’t really tolerate them for more than 4 hours at a time. I just think they are a little more intense than his old orthodics. I think with time though, he will adjust.


So I actually received a positive call from our secondary insurance company the other day regarding Alex’s gait trainer. If you remember, we have been working on this since April. We were asked for more information back in July and then in late August they denied us for requesting too many components instead of telling us what they will and will not pay for. Well, someone called the other day to tell me they were missing some forms and allowed me to obtain those and fax them over instead of flat out denying him again – which I thought was nice of them. I thanked her multiple times and now we are just waiting to see what they say. I sure hope for Alex’s sake that he gets it this time because he sure could use it.

Last but not least, I filled out an application the other day to get Alex enrolled in an Intensive Therapy Program while his current PT goes on Maternity Leave next month. This program is called Euro-Peds and it is a three month program of Physical Therapy 2-3 times a week for 1.5 hours a session. I really think Alex would benefit from this if he gets accepted and insurance will cover it. Keep your fingers crossed!
As always, thanks for reading our blog!
Posted by Keri at 8:37 PM