This week is Evan's week to shine at school and be the star of the week! Monday he got to share his poster board with the class and when I asked him what he talked about - he said EVERYTHING! (I am sure he did) On Evan's board he has a photos of his family, and lots of pictures from Chicago. Him touching a starfish at The Aquarium, playing with Legos at the Lego store, digging for dinosaur bones and playing with water at the Children's Museum. He also loves to camp, play putt putt and go bowling. He is full of wonder and lots of questions and he is all boy! 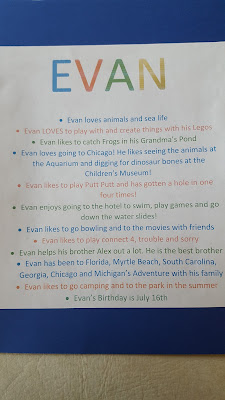 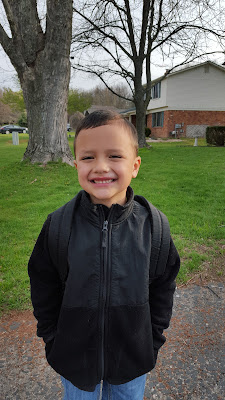 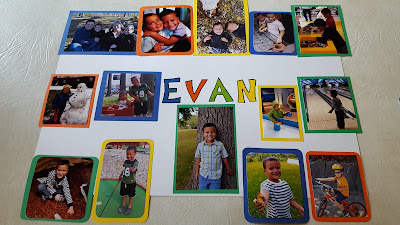 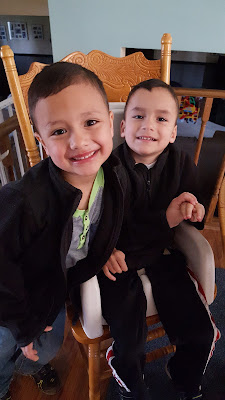 Tuesday for his first show and tell he took in his Shark Transformer he got at the hotel back in February. He is going to share with his friends how he won a 500 ticket jackpot on the Pirate game and got to pick the shark as a prize! He also had lunch with his friends Matthew and Alex.


Wednesday for his 2nd show and tell he took in his Scooby Doo figurines. He said he only passed around the scooby one to his friends. He has a castle at home that he likes to play with the figures on.

Thursday's show and tell was Belugi his Beluga Whale. He got Belugi in Chicago back in November when we visited The Shedd Aquarium. She has become his favorite stuffed animal and it is only fitting because he loves Sea Life, Ocean Animals and the Aquarium!

Friday he took in one of his favorite books - Fly Guy presents Sharks and also shared his photo of when he was in the newspaper a couple of weeks ago. 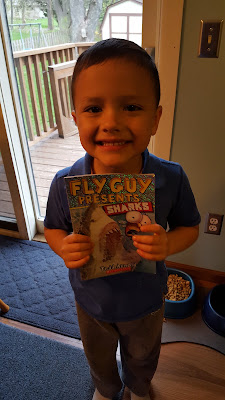 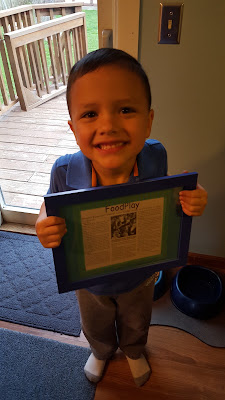 Evan had a great time being star of the week at school this week! It has been a fun experience for him and I am thankful for the memories he has to look back on! Just like his Brother, he is always a star to us!
Posted by Keri at 8:46 PM No comments:

This week Alex was the Star of the Week in his class. On Monday he shared his poster board of photos with the class. Included in his pictures are him on his bike, getting ready to ride a rollercoaster, time at the beach and pool, friends and family and times at different museums. Alex enjoys all of these things and more! In addition to the fun facts I provided to Mrs. Barry to share with the class, his friends wanted to know what his favorite color was and what kind of toys he played with at home. He also got to sit in Mrs. Barry's comfy chair during these times! 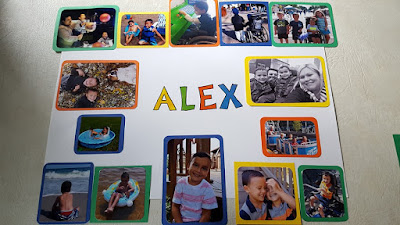 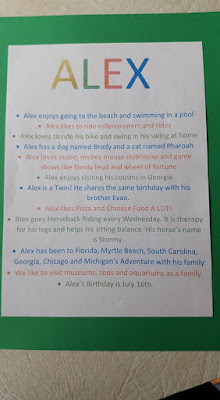 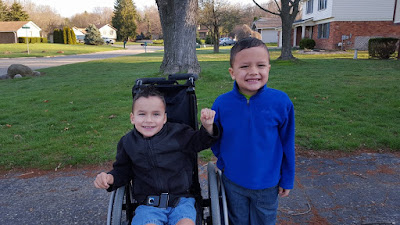 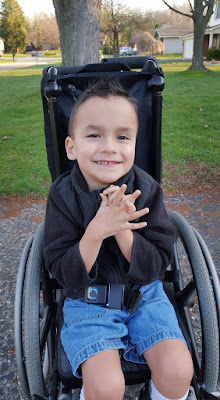 Tuesday was his first show and tell day. He took in his favorite stuffed animal - Frankie the Penguin. Alex LOVES Frankie. He snuggles and cuddles with him every night. He got Frankie from The Shedd Aquarium back in November and they have been inseperable ever since. The class really liked Frankie!


Wednesday was lunch with Mrs. Barry and two friends. Alex chose his friends Sapphire and Meadow because they are both such good friends to Alex, but that wasn't enough....he also invited Evan as well. Mrs. Barry said they all had a fun time together. Alex had a second show and tell and for this he brought in a frame with 2 pictures of him and Stormy (his horse at horseback riding) and the trophy that he and Stormy won last summer at the horse show. The kids were really excited to see the picture of Alex riding Stormy!

Thursday was show and tell #3. For this, he brought in one of his favorite toys. His VTECH drum set. Alex can turn it on, change the settings and drum away on his drum set. It plays a lot of different music which he loves! 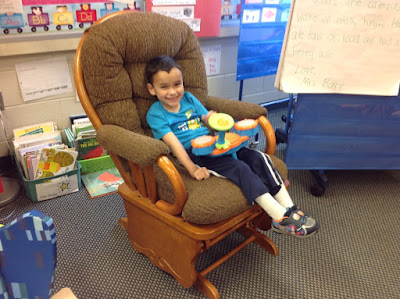 Finally Friday was his favorite book. Alex took in an ABC book that he enjoys for Mrs. Barry to read to the class.


This experience has been so much fun and I am so happy that Alex was able to share so many different things with his friends. He is a star to us every day, but to be a star at school is a lot more fun!
Posted by Keri at 9:38 PM No comments:


As I am going though our pictures, I am seeing that we did quite a bit of Easter related activities this year! Each of them unique and fun and family oriented. We are lucky we were able to do so much with Evan being under the weather nearly the whole 4 day weekend that they had.

The day before Easter, we planned a dinner up in Frankenmuth. I had my free birthday coupon to use in the month of March as well as another coupon and we decided to invite the boys' grandparents along with us. We all had a nice dinner and got some super cute pictures!! 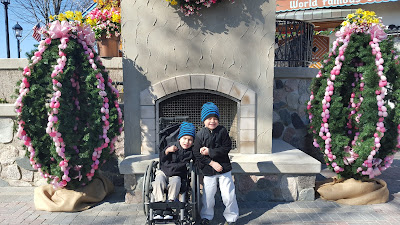 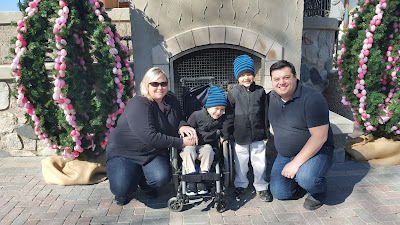 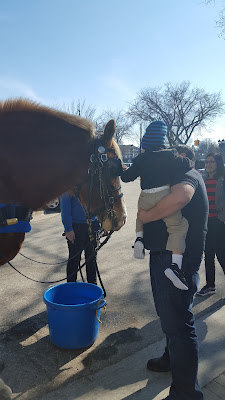 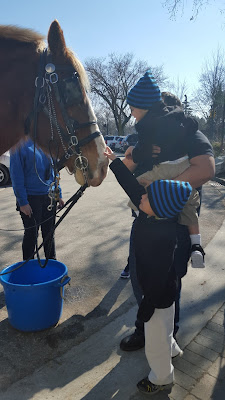 The Easter Bunny came around the dining room during dinner. Alex and Evan picked out candy and as I was trying to get a picture of them looking at the camera, Alex went in for seconds on the candy while the Easter Bunny was distracted! hahahaha! 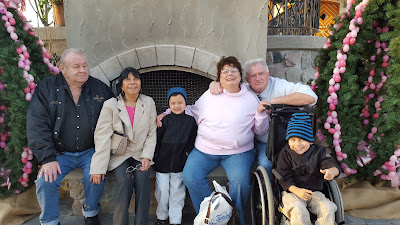 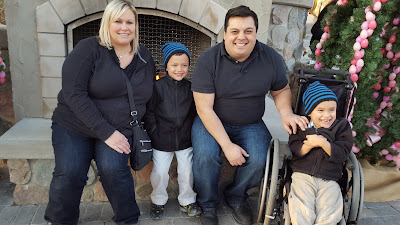 Finally Easter Sunday came and we spent the morning at home doing baskets and an Easter egg hunt with the boys. Later in the day, we went to my Mom's for dinner. A nice ending to a fun filled weekend!
Posted by Keri at 9:20 AM No comments:

It has become tradition to color Easter Eggs with Grandma and this year was no different. After a couple of appointments on Thursday, we sat down and colored some eggs. They turned out pretty nice! 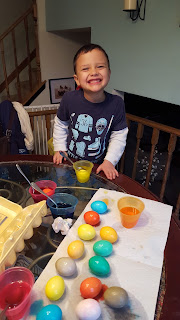 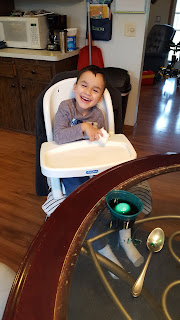 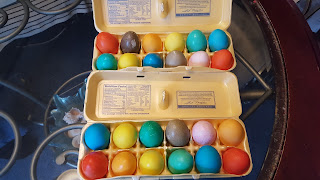 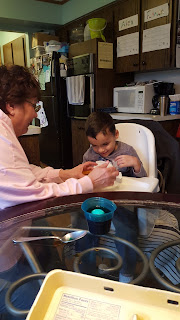 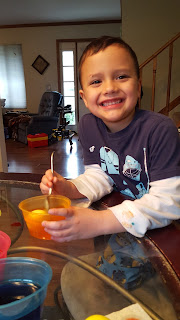 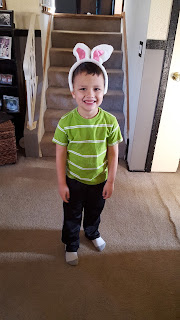 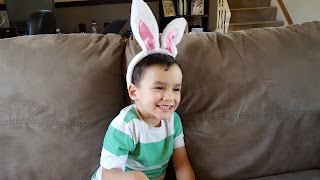 We attended the annual Easter Egg Hunt at Wojos Greenhouse by our house. Alex and Evan saw a few friends from their class as well! After the boys collect their eggs, they turn them in for a bag of candy. The Easter Bunny is also there, but the line was too long for us to wait this year. Luckily we already saw him at the Shriner Event! 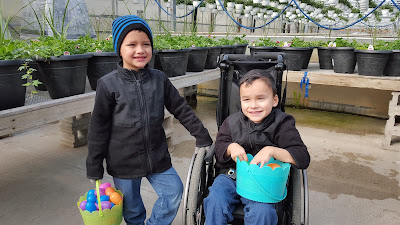 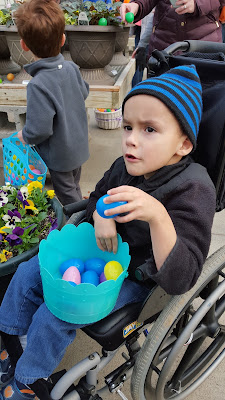 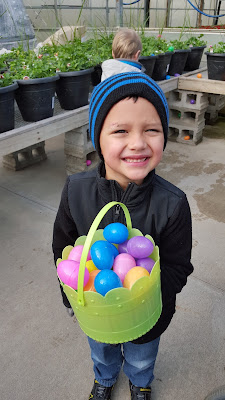 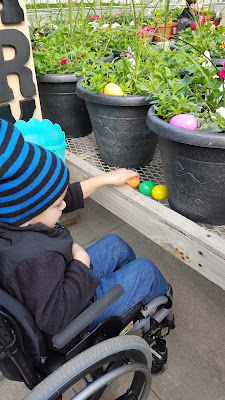 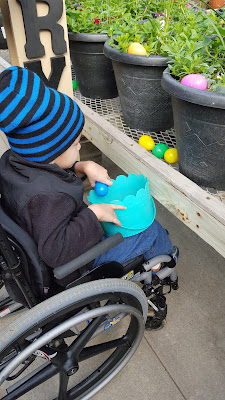