Understanding it all and Accepting things as they come

As a mom to a special needs child, I constantly reflect on why things are the way they are. I will probably never know the exact reason, but what Eric and I have concluded and accepted through this journey, is that this is the way things were supposed to be. God picked the two of us to be Alex's parents and God chose Alex's path. Although it is not the path we would have chosen for him, it is what it is.

I truly believe that if Alex had been a singleton with the same path, it would have been hard for me to try for another child. With God knowing that about me, is why he gave me twins and gave me Evan.

Having Evan, is not only a blessing and a huge help, but he keeps us going in life the way we should. Doing things families do; Not holding back because we have a child in a wheelchair. It makes me want to do even more to prove that we can, and we will!

Evan continues to grow as an individual and is blossoming into an amazing brother for Alex. I know things can't be easy for Evan. Not having the built in playmate you expect when you have a twin. Not having that other half to talk to, have conversations with, ride bikes with and run alongside, but he is adjusting just as we are - and he is doing a wonderful job.

*The boys went to Grandma's a couple of weeks ago to spend the night, and as Eric was leaving, Alex got upset. Evan went right to him and comforted him, told him it would be alright. Alex calmed right down.

*Evan was making a Birthday card last weekend for a friend, and I asked him if he would sign Alex's name as well. Instead of signing it himself, he took the card and marker over to Alex at the table, put the marker in Alex's hand and helped him write.

*If I step away from the table while I am feeding Alex, Evan will step in and give him a bite or 2

*A couple of weeks ago at an event we were at, Evan participated in a bowling game. After the game he was awarded a piece of candy. After his second turn, he brought the second piece of candy to Alex.

*When I got Alex off the bus today, Evan greeted us and offered to push Alex up to the house, and did.

These little moments may not seem like a big deal to some, but they mean the world to me. There are many days when I get down on myself for not being a good mom. Whether it be losing my patience or just being frustrated with the day, seeing my boys interact and love on each other gives me reassurance that I must be doing something right. Even though they don't have the relationship that some twins may have, they have the unbreakable bond, no doubt. I am so thankful for that.


These 2 pictures are from the 4-H discovery day we attended a few weeks back. Their curiosity for snakes does bother me a bit. Neither of them are afraid to touch them. 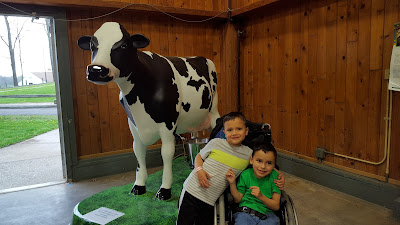 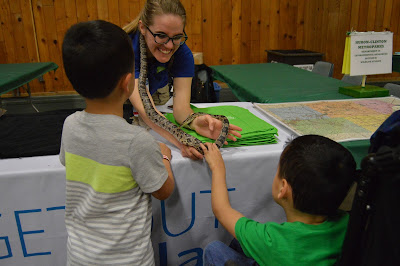 Last weekend I had my niece Layla over, along with my nephews Laken and Sailor. The kids all had so much fun together and I cannot wait to have them over again. My Mom and Dad visited as well and I got some nice pictures of them with all of their grand kids. It turned out to be such a nice time!