School, Therapy and Everything in Between


School is off to a good start for Alex and Evan. Both boys are loving it. Evan got to tag along for the first time this week and although he didn’t do very well during circle time, he had a blast playing with all of the toys and going down the slides at the playground. He is such a ham.

Evan will begin speech therapy in a couple of weeks. I had him evaluated last week because he isn’t talking yet. Ok, let me clarify, he talks….just not as much as he should. He has his own language and I can understand most of what he is talking about, but he should have more words by this age and he just isn’t there yet. I thought at first I may be jumping the gun because Evan is a very physical kid and he is excelling everywhere else and he also has a twin with whom he speaks to very often. Those could both very well be factors in him just not feeling like he has to talk yet. I just don’t want to sit on it in case there is a problem. I have seen such success is Alex’s Physical and Occupational Therapy that I am not afraid to move forward. I think Evan will do just fine once he gets going. His class will be on Tuesday mornings after Alex’s class so I will keep you posted on how things are going.


Speaking of School, Eric and I both begin our fall classes next Thursday. Yep, I am overwhelmed already, but I think it’s just me getting myself worked up. I have been out of school for awhile now, so going back with two classes, plus my already busy schedule with the boys is a bit daunting. I am sure once I find my groove, I will be fine.


Alex is getting his AFO’s tomorrow!! I am excited to see how they will work and how they will help him. I will post pictures when he gets them!!


So the Gait Trainer (Walker) process is even more of a mess now then it was a few weeks ago. I will admit that I am frustrated with all parties involved and after talking with Alex’s school PT today, I think I am going to back down and not stress about it. As much as I would love for Alex to have the walker, he still needs to build his core, learn how to sit on his own and maybe even crawl. Those things are much more important to me. At least he has a stander, so he is weight bearing on his legs and even though he is strapped in, he is still working his core. He needs a strong core in order to walk, so I think that is what we should be focusing on. I don’t want to get too far ahead of the game and frankly the stress is killing me right now.


The weekend here is supposed to be beautiful so we will be taking advantage of that. There is an outdoor craft and art fair nearby that I plan on going to, I am sure we will take the boys to the park and maybe even the apple orchard down the road. We’ll see. I love this time of year and there are always so many neat things to do! Plus, living in Michigan, we all know what is coming (snow and cold) so we have to enjoy these next 6-8 weeks before we are holed up for the winter!!!
Posted by Keri at 9:46 PM No comments:

September is here already and I am still asking "Where did the summer go?"

It's been a busy week with therapy appointments and Alex starting school. I know you may think Alex is a bit young for school, but it's an hour and a half class through his Early On program once a week.

He did really well on his first day. He didn't cry or get upset at all. He enjoyed his time with the teachers and therapists and had a great time playing. He had a huge smile on his face during story time which just made Ms. Bridgette's day! Evan will be tagging along next week since siblings are allowed even though it is a Special Ed class. He will have a blast I am sure. It's hard to believe that they will be in preschool next year. EEK!

On Monday we took the boys to the park and I took some pictures of them since taking them to the studio has proven to be quite a task with two 2 year olds. I am pretty happy with the way they turned out. I couldn't get any really good shots of them together, but individually they are super-cute!!

They melt my heart. I am so blessed to have two handsome little men! 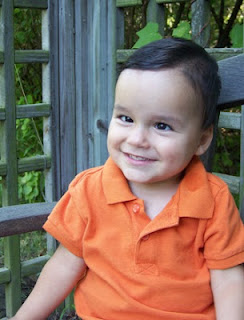 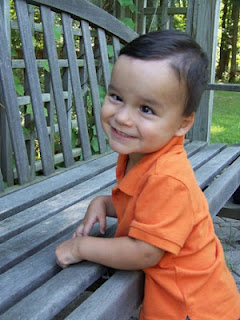 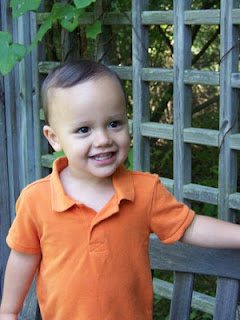 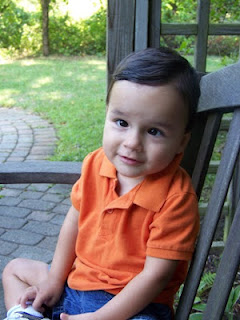 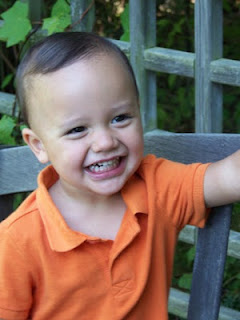 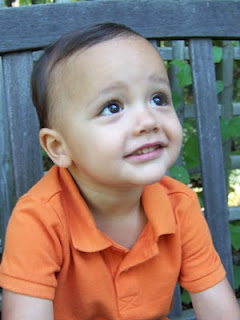